The site of Knossos is the largest and most impressive of the Minoan palaces and comprises some 20,000 square meters and over 1500 rooms. Knossos lies just 5 km (3 miles) from Heraklion, and besides the palace proper also has over 35 centuries of remains in surrounding hillsides. 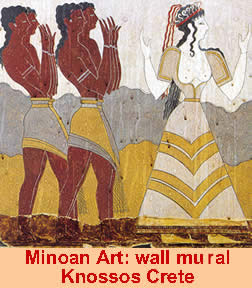 Before 1900, Knossos was considered mythological, the legendary court of the Cretan King Minos, whose wife Pasiphae mated with a bull and bore the Minotaur, a monster half-man, half-bull, who was housed in the labyrinth designed by the master builder Daedalus. Minos demanded a tribute from Athens, which was required to send six men and six women every nine years as human sacrifices to the beast-man.

These sacrificial victims wandered lost within the labyrinth until found by the Minotaur and were gobbled up. This practice continued until the coming of the young Athenian hero Theseus who, with the help of Minos's daughter Ariadne and her ball of thread (which Theseus trailed behind him as he wandered the labyrinth so that he could find his way out again) slew the beast and carried Ariadne off to Naxos.

Daedalus, who had colluded with Ariadne and invented the magic ball of thread, was imprisoned in the labyrinth by Minos but managed to escape with wax wings he had fashioned for himself and his son Icarus. Icarus though, flew too close to the sun, and the wax bindings on his wings melted, causing him to fall to his death in the sea offshore from the island of Ikaria (which is said to resemble a wing). 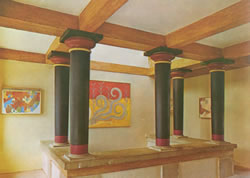 Theseus, meanwhile, sailed back to Athens, but forgot to change his black sails to white (a signal agreed upon with his father, Aegeus, to indicate that he was alive), and Aegeus, believing his son dead, cast himself into the sea, which became henceforth known as the Aegean. Theseus became king.

Less known than the above details of the myth surrounding the labyrinth of Knossos are the reasons for the demand of Athenian youths as human sacrifices to the Minotaur. King Minos had a son named Androgeus who, according to the myth, was sent to represent Crete in the Athenian games, being a strong athlete, and was murdered by the King of Athens out of jealousy.

The Cretan fleet was sent in retribution and took possession of Athens, but instead of destroying the city, demanded the 'tribute' of youthful victims every nine years. Later, Theseus, son of the king of Athens, volunteered to go, in order to end the suffering of his city by slaying the Minotaur.

In Greek legend, Mount Ida on Crete was the place where the Earth Mother Rhea gave birth to Zeus, who was raised on honey and goat's milk and tended by nymphs. Zeus was also protected by an army of youth against his father Kronos, to whose power Zeus was a threat. Minos was the son of Zeus who became King of Knossos, Crete, and the entire Aegean.