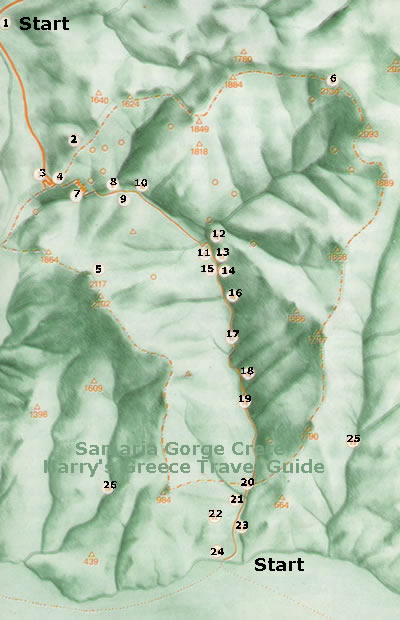 The Samaria gorge, at 16 km, is the longest gorge in Europe and is a Greek National Park.

Geologists theorize that the gorge was formed 14,000,000 years ago.

The park is closed usually until May or until there is no danger of flash floods and the trek deemed safe.

Independent walkers must report to the guard house at Xiloskala before setting out.

Various tour companies run daily escorted walks which include transportation to and from the gorge.

Regular buses run from Chania to Omalas 1 km from the start point at 'Wooden stair' or Xiloskala.

Upon completion if going north to south there are several guest house at Ag Roumeli.

However no roads service this part of the Cretan coast, only ferry boats which run regularly to Hora Sfakion (east) and Sougia (west).

The danger of flash flooding must be taken very seriously, especially in late spring and early fall.

In 1993, some walkers were washed out to sea and drowned.

The gorge is flanked by the Lefka Ori or White mountains on the east and Mt. Volakias on the west (2116 meters).

The walk takes between five and seven hours depending on how slow you go and how much rest stopping you do.

In places the gorge reaches 3.5 meters in width and has 22 separate springs and several caves.

Of the over 450 species of flora and fauna 70 are endemic species found nowhere else.

The gorge is also home to several species of animal found only on Crete: The Cretan wild goat or "agrimi", and the Cretan badger, martin, weasel and spiny mouse. Reptiles such as the wall lizard, tree frog and gecko call it home too.